3rd of May. What holiday are we celebrating?

Constitution Day is a Polish national and public holiday that takes place on May 3rd. The holiday celebrates the declaration of the Constitution of 3 May 1791. Festivities date back to the Duchy of Warsaw early in the 19th century, but it became an official holiday only in 1919 in the Second Polish Republic. Delisted during the times of the Polish People’s Republic, it was re-established after the fall of communism in modern Poland.

The Constitution Day on May 3 commemorates the establishment of the first Polish law regulating the political system of the Republic of Poland. It was the second such document in Europe and the third in the world. The act changed the state system into a hereditary monarchy. Pursuant to the Constitution, powers were divided into legislative, executive, and judicial.

In the Polish School of st. John Paul II, we celebrate this festival every year, usually by participating in the May 3 Parade in Chicago. This year, students of our school dressed in national colors sang the Polish Anthem “Mazurek Dąbrowskiego”.

We are proud to be Poles! 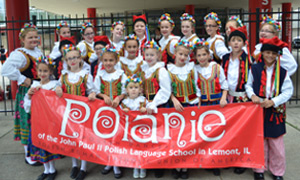